Psychologist Ed Northrup, desperate to escape his unhappy life, faces a cluster of mysteries: Why was 14-year-old Grace Ellonson abandoned and where is her mother? Where does rancher Vic Sobstak go when he sneaks off the ranch at night? Why has Vic’s church-organist wife, Maggie, turned up almost fatally drunk? Who's hanging racist flyers around town? When Ed helps Deputy  Andi Pelton investigate, no one knows the answers, but they’ll soon find out—disastrously. Amid the chaos of the mysteries’ violent collision, Ed, Andi, and Grace face the most formidable decision of their lives.

Reviews for Climbing the Coliseum 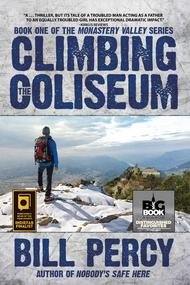 Buy on B & N!
Buy at BlackRoseWriting.com

Climbing the Coliseum was a Finalist for the 2014 Foreword Reviews' Book of the Year Award and was named a "Distinguished Favorite" in the 2017 Independent Press Awards!

​​​“The author is a fine writer who does a wonderful job of capturing small town life. His dialogue is spot-on, and most of the characters are interesting and often amusing, especially Grace, who insists on calling Ed by his last name. . . . The author is a psychologist, which may have helped him create characters with realistic daily concerns. . . . Climbing the Coliseum is a highly enjoyable novel. Fans of Ed, Grace, and Andi will look forward to the author’s planned sequels.”   Read more . . .
- BlueInk Reviews

​“Through the thrilling story of a psychologist in a small Montana town, Percy broaches complex topics with creativity and sensitivity. Bill Percy’s Climbing the Coliseum is witty, insightful, and at times heartbreaking as Ed Northrup, a psychologist always willing to lend a helping hand, finally learns how to help himself as well. . . . Often more character study than mystery, each player is well-drawn, flawed yet likable, and has a distinct voice. . . . Climbing the Coliseum manages to be both reflective and action-filled as the men and women of Monastery Valley each deal with crises in their own way. . . . An engaging and uplifting tale, Climbing the Coliseum will appeal to mystery lovers who enjoy characters with depth. The men and women of Monastery Valley will cause laughter, and maybe a few tears.”
- Foreward Reviews - Clarion 5 stars!​

“A disenchanted, depressed psychologist finds himself caring for a rebellious teenage girl and helping police investigate a racist group in Percy’s debut thriller. . . . [Its] tale of a troubled man acting as a father to an equally troubled girl has exceptional dramatic impact."