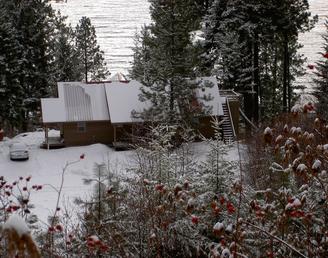 Home, where I write in north Idaho

Where I write in north Idaho

Quote of the day.

"Evolution dictates that the first job of any good story is to completely anesthetize the part of our brain that questions how it is creating such a compelling illusion of reality. After all, a good story doesn't feel like an illusion. What it feels like is life."

- Lisa Cron, in ​Wired for Story

When you're in Sister Pancratia's fourth grade, writing a book report in iambic pentameter is, well, expected. It's also a heck of a way to fall in love with the craft of writing! My first three novels (no relation to the Monastery Valley Series) and twenty or so short stories came in my twenties -- and they stayed there, thank God, locked in the proverbial drawer, never to emerge! But I was hooked, even though raising a family and building my psychology practice and teaching grad students took most of my time. Still, when I got a chance, I'd try again, decide that what I'd written was fabulous, re-read it a week later, get sick, and hide it away. In the same drawer.

Till life slowed down enough and we moved out West . . . I got serious in 2009, wrote maybe thirty shorts, and one day wrote one that, a week later, I still liked. A new experience! A month later, I still liked it! But it was too big, with too many things going on. It needed to be a novel. The seed of Climbing the Coliseum ​was sown, and I decided I was now a writer. (Don't tell Sister Pancratia.)

Climbing was named a Finalist in the 2014 Forward Reviews' Book of the Year competition, and in 2017, it won "Distinguished Favorite" in the New York City Big Book competition.

My second novel, Nobody's Safe Here, the second book in the "Monastery Valley" Series (Climbing was Book One), won two "Distinguished Favorites" awards: the first in the Independent Press Awards and the second in the New York City Big Book Award competitions.

Book Three, The Bishop Burned the Lady, follows the main characters of the "Monastery Valley" series as they grapple with new mysteries in the valley.  Bishop won the Independent Press Awards "Distinguished Favorite" award in 2018.

I love writing. I even love revising! Book Four, Standing Our Ground, is out January 2020, and I'm currently at work on book 5, whose working title is The Posse, the Hotshots, and the Miracle​ - here's a tease: It's about a Bundy-style takeover of federal lands while St. Brendan's Monastery is attacked by a major wildfire - and Acting Sheriff Andi Pelton's caught between these crises! I'm aiming for releasing The Posse​ in 2022 - because book 6 (no title yet) is already simmering on the stove.