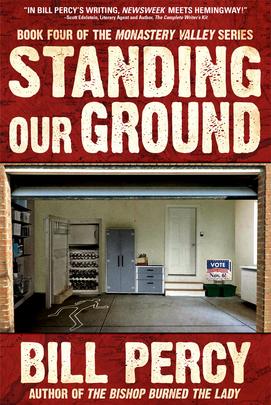 Standing Our Ground, released Jan. 23, 2020, is available on Amazon.com, BarnesandNobel.com, at BlackRoseWriting.com, or ask at your local bookstore.

9:37 p.m. The hands on the big Howard Miller wall clock above her
cubicle seemed like they hadn’t moved in an hour. Deputy Andi Pelton
yawned and then called home. Ed would still be up. Just as he
answered, she yawned again. Stifled it.

“Shoot me. I’ve never been so bored. If this was Chicago, we’d have
four, five drive-bys by now, a couple rapes, runaway kids. Here,
everybody must be in bed.” She glanced up at the clock: still 9:37.

“I miss you on these evening shifts.”

That touched her. “Me too. Ed, let’s go public with our marriage. I
want everybody to know.”

“How about we talk about it tomorrow on the way to Missoula?
Grace’ll be in her car, so we’ll have plenty of privacy.”

She heard Ed yell, “Be safe,” as she hit End. She grabbed her outer
vest and started putting it on as she rushed out to Reception. She passed
Marla without slowing. “How many shots?”

Andi kept moving toward the parking lot door. Over her shoulder,
she yelled, “Where?”

Marla called after her, “206 East Cedar Street. The call came from
the house next door.”

She ran out to the lot. Just before flicking on her siren and lights,
she heard Xav’s siren fire up north of town. Good. He’s close, she thought. She finished adjusting the vest as she drove. Four minutes after the call, she swerved around the corner onto East Cedar Street, Xavier’s siren close behind.

Shots fired, she thought. “Be careful what you wish for,” she
whispered.